Grazie for reading, especially you girls with beautiful eyes and big….Aiaiai – I need an aqua minerale to cool me down. Scusi if my Inglese is not too good! I travelled recently from Italy, the country of love and passion, and now live in London. As you English say ‘Bears with me’ (I don’t quite understand why bears would be with me though – they are dangerous – no?

So, today’s lecture is on the Clone-A-Willy kit and how it works. The Clone-A-Willy kit basically is a ‘mould’, so that gentiluomo’s…gentleman…everywhere can leave part of them behind for their partners when they go away on business! I know women in Italy will miss my large salami stick, so this would have been ideal for those bellas! I might have to put mine in the post back to Italy….

Anyways, I digressi! So my students, you do not want to make mistake with this – you’ve only got a one shot product! So listen carefully. Andiamo!

Before you start, have a penis ring on hand handy – it keeps you harder for longer, thus creating a better mould! Perfecto! And also, it is always fun to have your partner present, so that they can help you out in any way.

Most importantly you want to cut the tube to your size; otherwise your baguette will have excess mould at the end which will render the whole thing useless! You do not want that happening, so take care in cutting it.

Next, collect 425ml of hot aqua in a measuring jug – and stir it till you get 37 degrees Celsius. Put this in a mixing bowl with the Clone-A-Willy mix and start stirring just like you’d stir a fantastico bolognaise sauce at your casa madre! (Mother’s house!) After about a minute pour the mix into the tube and then when it’s nearing the second minute, stick your Berlusconi baton into the tube – making sure it goes all the way in!

When you’re certain the mix has gelled completely (you can test it by touching the top), take your penis out slowly.

Now, my advice here would be to let the mould sit like a fresh baked biscotti for a couple of hours until it hardens – making a better mould. After that, mix the rubber mix up in a container for due minuiti and proceed to pour it into your mould.

Wait 24 hours, and finito! There in front of you will be a mould of your willy, for anyone to enjoy and…as you English say…’have a jolly good orgamso with’!

I hope you learnt much from my lectures. Now I will proceed to collect all your 5000 word essays on how the economic crisis in Europe is having a positive effect on sex toy sales. What? You haven’t done it? Well well well…very well boys you can go, just bring it tomorrow! Girls, I’m sorry your excuses just aren’t good enough – you’re going to have to stay behind after class and be punished. You’re each going to have to help me make my own Clone-A-Willy, I’ve got twenty here so it may take a while! 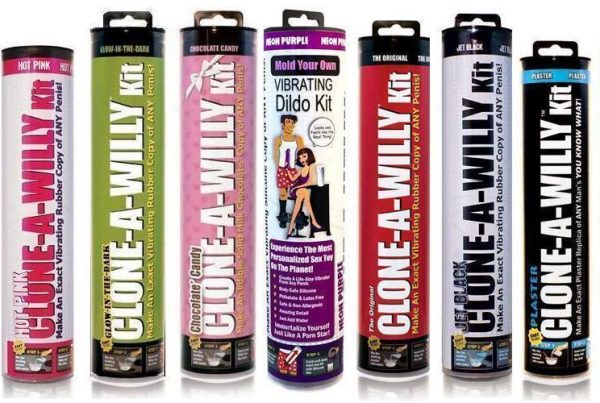 Wow look at this!

This is an optional, highly
customizable off canvas area.